Nothing unusual here folks, move right along. If you want an stressful night out at the cinema go and see "Children of Men". The bleakest, starkest view you'll get of how the UK may be in 2027, until it comes along.

Posted by impossible songs at 12:45 PM No comments:
Email ThisBlogThis!Share to TwitterShare to FacebookShare to Pinterest 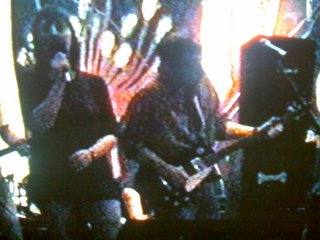 Posted by impossible songs at 4:26 PM No comments:
Email ThisBlogThis!Share to TwitterShare to FacebookShare to Pinterest 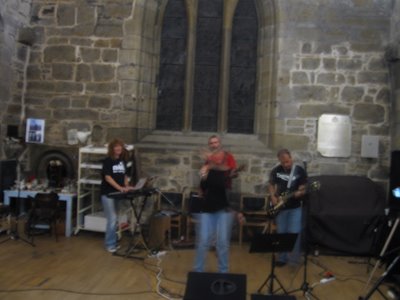 A busy week for us and the cat. It seems like he’s been catching mice everyday. Possibly as a result of the harvesting work in the field nearby. This morning I got up to find a poor dead mouse placed on top of the barrel table outside our back door. Left there as an early morning gift for us no doubt. Funny how hard it is to appreciate this kind of thing at the start of the day.

The rest of the week has been spent drinking beer and playing music at various local venues with Martin, Heike and Siggi. Sunday’s gig was outside under the Forth Railway Bridge at the Two Bridges Hotel as part of Ferrystock II in the Arts Festival. A brilliant day with great performances from our friends Norman Lamont, Jill Hepburn, Ewan Michael Riley, Tommy Mackay and the Impossible Songs bigger band. The day was sunny, warm and the promenade was crowded with visitors, sightseers and all kinds of water borne activity on the river. I don’t think Martin, Heike and Siggi had ever expected to play in such a unique and spectacular setting.

Monday night we played at the medieval Priory Church with a far smaller audience but a fantastic overall sound (thanks to Martin), a fun and intimate gig that saw us all playing well and ending in an impromptu jam on a reggae version of one of Norman’s songs, the name of which escapes me. Then back to our house with a few friends in tow for more beer, cake and wine (the staples of the German diet it seems).

On Wednesday we played at the hot and sweaty Forest Cafe with special guests Confushion (Fraser and John) providing a blinding half hour set in the middle of ours. The Bohemian, candlelit, shambolic café atmosphere was great and though we made a few blunders and the drum programmes were temperamental it was a very enjoyable night. I was happy not to fall from the tiny stage and that the mountainous PA speakers surrounding us stayed in place despite looking likely to collapse at any moment. Again the night ended in a small beer fest lasting into the wee small hours. Martin, Heike and Siggi left to begin the long journey home next morning nursing the now familiar beer headaches and hangovers.

Thursday was the regular OOTB night and was a pretty quiet one though the quality of performances was high. I was compere for the night and Tommy Mackay started the evening with “Pink Floyd are shit”, his Syd Barrett tribute song. As I listened to the lyrics properly (for the first time) I realised how good a song it was and how poignant it had become. On the way home in the car we had our usual sing-song based around the Supreme’s “Happening” meeting Herb Alpert’s “Tijuana Taxi”, bizarre but a total hoot and ripe for a remix or a cover. This led nicely into the Chiffons “Chapel of Love” and the idea of forming a tribute band called the “Pish Supremes”. The name emerged when we realised we couldn’t figure out what the opposite of supreme might be. Two middle-aged men driving in a car singing MoTown, guilty pleasures? I suppose you had to be there..

Posted by impossible songs at 9:56 PM 2 comments:
Email ThisBlogThis!Share to TwitterShare to FacebookShare to Pinterest 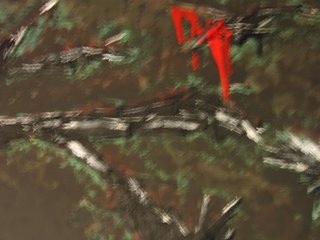 This story was first recounted in the Golden Legend, a thirteenth century manuscript describing the lives of the saints. Helena, the mother of the Roman Emperor Constantine the Great, followed her son’s example and in AD312 adopted the Christian Faith. As an elderly woman she travelled with her royal entourage across the Middle East and visited Jerusalem and a number of other holy sites. When in Jerusalem she met an old man named Judas who claimed to know the exact site where Jesus Christ was crucified and where the cross once stood. Helena questioned him intently, paid him small amount money in the form of silver coins and tasked her servants to investigate the site that the old man had described.

Some workmen were hired and an excavation on the site of the Crucifixion revealed three crosses, buried flat in the soil not far below the surface. Helena decided that the remains of the crosses should be tested and prayed asking for a sign from God. A dead boy from a village near Jerusalem was placed upon each cross. When laid on the first two nothing happened, but when the boy’s body was laid upon the third cross he was miraculously brought back to life, proving that this indeed was the true cross. Helena wanted to take the cross back to Rome in order that her son could view it and administer its powers. Before she had the opportunity to arrange any of this, a war broke out with the King of Persia, Chosroes II.

During one of his early campaigns against Jerusalem he stole the cross and took it to Persia. After this Helena returned to Rome where she lived out her latter years as a nun serving the poor and tending to the sick. It is said she died of a broken heart, brought about by the thought of the cross of Christ falling into the hands of non-believers. She felt that she was responsible for this “abomination”.

However in AD629 the Byzantine Emperor Heraclius recovered the cross and brought it back to Jerusalem. He was about to make his triumphant and flamboyant entry into the city when the main gateway crumbled and fell down in front of him and his army. The gate to the city was blocked by rubble and dust and in the midst of the turmoil and angel appeared to Heraclius. The angel reminded him that Jesus was humble and that he would have ridden through the gateway on an ass and without any regal or military splendour. Heraclius took the warning to heart and so barefoot and without any insignia he carried the cross towards the gate. As he approached it, the gate opened and the rubble cleared before him as he entered the city.

From this point on the fate of the cross passes into the grey mist of history and no more is known of it nor are any further details recorded.

Some relevant pieces by Adam Elsheimer:

Posted by impossible songs at 8:28 PM No comments:
Email ThisBlogThis!Share to TwitterShare to FacebookShare to Pinterest

With all the speed of a champion bog-snorkeler our plans for the visit next week of Martin, Heike and Siggi are taking a surprising shape. Their arrival coincides with the week of the South Queensferry Arts Festival. We are expecting them to join us and to play along with us at some of the events – a kind of Impossomobil band (Their vintage rock band is called Mobil back home in Germany). We’re not sure yet how we will all sound but the line up will be: