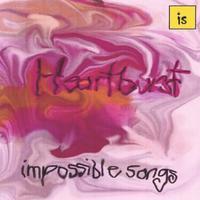 In a super piece of marketing and creative odd-ballness we've produced a range of funky fridge magnets, no self respecting fridge or home should be without some - or all. There are three big fat beauties to collect, nicely priced at 40p each, email, call or comment. Actual sizes are not quite what is on your screen at the moment but who cares, your fridge will love you more than your family as a result of this thoughtful purchase.

We'll be selling, giving, swopping and trading these collectors items at www.outofthebedroom.co.uk most Thursdays and at St Andrews Church, Princes Street - 1900 on the 2nd July and at the Roxy Art House 2100 on the 8th of July. We do sell nice CDs too, try one today!

Posted by impossible songs at 9:47 PM No comments:
Email ThisBlogThis!Share to TwitterShare to FacebookShare to Pinterest

Well we had a lot of fun. We performed for about 55 minutes to a small but well formed audience. The theatre show on before us failed to live up to it’s promised audience expectation and we suffered as a result. However we played on and though I say so myself were pretty good. A decent (big) PA and foldback and wide stage makes such a difference, we both relaxed and just got on with playing the songs, fluffs and bouts of nerves were few and far between. Ali looked pretty good in her new pink jacket.

That’s my baby, All the Vows, Dancing, Daddy, Tokyo Skyline, How I Hate, Not Pretty, She’s a Waitress, WIP, The Rainbow, I Miss That Boy and Happy Like. We had the song “Damage” held in reserve but didn’t play it.

See us next at OOTB on Thursday 30Th June at the Waverley www.outofthebedroom.co.uk and on Saturday 2nd July at St John’s in Princes Street (West End) at around 7pm. (following on from the “make poverty history” rally and march in Edinburgh).

Next gig at the Roxy, Friday 8th July at 9pm.
Posted by impossible songs at 5:55 PM No comments:
Email ThisBlogThis!Share to TwitterShare to FacebookShare to Pinterest

Acoustic/vocal soft rock for snobs and intellectuals, neo-vegetarians, carnivores and pranksters of all ages. The play list is a closely guarded secret and even if you saw it you wouldn’t understand any more than we do.

CDs may be up for sale along with fridge magnets, a single wah pedal may be heard behind vocals and walls of sound, oh and water shall be consumed, who knows - some stuff may be strutted.

A day in the life

2 coffees (forgot to take the cod liver oil, vitamins and aspirin)
4 pieces of toast
1 egg (fried)
4 small sausages + brown sauce
1 newspaper (The Scotsman)
1 EBay transaction (a used light sabre)
1 can of Tennants lager
1 bag of prawns (thawing out for stir fry)
1 viewing of the Sponge Bob movie – with the kids
4 games of Mario Cart – highest place second
1 Great Escape scene acted out on the tyre swings
2 phone calls, also read numerous emails
3 plastic cups used
1 cloud shaped like a question mark
1 cloud shaped like a question mark that was gone quickly
1 made up story about the “Witch's Tree” and her gory death
1 series of thoughts about Warren Zevron’s WW of London
1 stir-fry
1 bout of homework assistance
Some text messages, can’t remember how many
1 strop, 1 minor tantrum, 1 hiding in the toilet (not me incidentally, a small person)
1 sleep
Posted by impossible songs at 10:11 PM No comments:
Email ThisBlogThis!Share to TwitterShare to FacebookShare to Pinterest

Things that can happen to people.


Careful, these are things that can happen to people, though they are not necessarily bad.

Impossiblesongs · Off The Rails (remix)