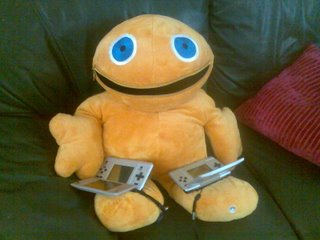 A whirlwind visit to McDuff and Aberdeen to check on the grown up children and their progress. I received a late bottle of a Glenfiddich liqueur and a DVD of the Da Vinci Code and the unexpected removal of the rear part of the car’s exhaust to add to the fun of a few days out. In a northern mix of rain and sun we braved Codona’s funfair by the beach in Aberdeen and were somewhere between being fleeced and rewarded by the various attractions and arcades. Grabbing a gift from those “crane” machines is a popular family obsession (on the last visit we salvaged two large cuddly Disney toys); this time it was just one, but a giant Zippy no less. I dread to think of what its actual cost to us must have been but who cares?

We were just finishing lunching on mince, skirlie and salad (this is Aberdeen!) and listening to a Freddy Mercury impersonator doing his sound check whilst the football results rolled up on Sky sports. Then we wandered over to the arcade where the kids were still pummelling the “crane” thing just in time to see a giant Zippy hover across the booth and into the hopper that was set to give him freedom. A great and rare moment to savour after two hours of struggling with these crap machines – much cheering and air punching followed.

After three glasses of wine, some fajitas, chocolate and Glenfiddich the Da Vinci Code doesn’t seem so bad a movie, apart from the last quarter and the whole ridiculous Roslin guardian thing. It’s very hard not to think of the retail park, Costco, Ikea and all the Swedish meatballs and Chelsea Tractors just a few minutes away from one of Mary Magdalene’s temporary resting places. One piece (?) of Scottish history they’ve managed to miss out of the vague and patchy Scottish curriculum, next year perhaps? After all history is “just one thing after another” and who really knows what happened when?

Posted by impossible songs at 6:01 PM
Email ThisBlogThis!Share to TwitterShare to FacebookShare to Pinterest