The Castle has been found 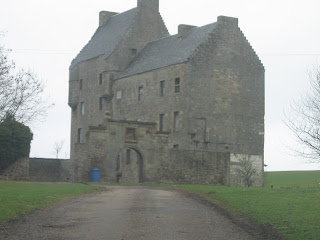 Big old castle: After living here for almost two years we’ve just discovered that the huge bulk of Abercorn Castle is on our doorstep. Proof of how effective castle design can be if you want to avoid annoying neighbours and invading armies.

An evening spent reviewing at OOTB. It turned out to be a full and varied show and the place was busy all night. I was pleased to see four new female acts debuting (possibly some kind of first for OOTB) and they were all stylishly different and pretty interesting. We ride an odd curve in OOTB, a few months ago when it was quieter we were considering dropping back to a twice a month thing and now it’s just about impossible to get a slot unless you turn up really early and new faces are appearing every week. That’s show business.

More boxing and packing and sorting. Becoming bored I was starting to play a game of secret box subversion. The idea being to include incorrect items in a labelled box i.e. a bongo drum in the bathroom box and so on. I was caught on the first box.

An Italian meal (that was fine for me but not so good for Ali) surrounded by jubilant Irish rugby fans and then to the Usher Hall for the Garfunkel concert. He was very good, still possessing that unworldly and at times scary voice, no hint of the aging process cracking the ethereal veneer. The material was as good as you can ever get, all the old songs and a few standards thrown in for good measure, a nice change from rock and blues and delusional singer songwriters.

Several small furry creatures revisited: I was cleaning out the garage and came upon a rats nest in amongst some cardboard boxes that I was about to transport to the dump. Not a pleasant discovery so I gingerly raked the nest outside, found no rats (thankfully) and than decided to set fire to it. The fire took hold far more quickly than I’d expected and in no time various odd, stained and useless boxes were added to the fire and were ablaze. At one point when the wind changed direction there was a real possibility of the garage catching alight – what fun you can have when moving house.

Putting cushions in a clothing recycler: As I was dumping some of our excess baggage I found myself filling a clothing skip with cushions, handbags and strangely enough a wooden Zulu figure. Quite who would wear such an outfit beats me but if you ever see anybody wearing seven blue cushions, carrying two small black hand bags and clutching a black figure, I don’t want to hear about it.

Posted by impossible songs at 6:43 PM
Email ThisBlogThis!Share to TwitterShare to FacebookShare to Pinterest