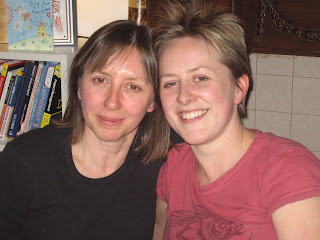 Norman Lamont asked us (using the link above) to list eight kookie (or otherwise) things about ourselves, clearly we did not have enough to drink but here’s a good stab at the list anyway. It’s not easy when you live on the normal side of a line that is not normal but is a simple continuum on a line from the place that is normal to the place that is not normal but may be natural and comfortable and is probably, depending on my mood and point of view where I may well feel most at home and that is not normal. The other problem is that we lack the requisite number of blogger types to share this shit with so it may go no further. If it works it works. Oh! and I have to do this today because I have to.

I’m ambidextrous and can do mirror writing with both hands, backwards.

Ali and I have seven children between us: Three girls and four boys, (and I have three grandsons).

We first met when in a Christian cult in the 70s.

I was arrested at the Windsor Free Festival in 1974 while asleep.

Ali is a qualified accountant but has never been to Majorca(?).

We have four cats (three of whom live with us) and two of whom are kittens.

I used to gig on the same band/disco circuit as the Bay City Rollers.
Posted by impossible songs at 11:28 PM
Email ThisBlogThis!Share to TwitterShare to FacebookShare to Pinterest