Wedding of the century 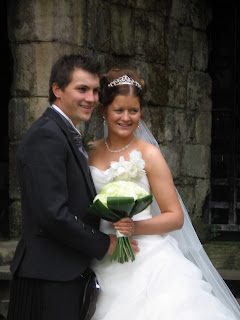 Wedding of the century

Erin and Guy’s wedding took place on the 15th and it was quite simply a wonderful day. The bride was (is) beautiful and the groom as smart as a new pin. I was in every way the very proud dad and really enjoyed each part of the ceremony and celebrations. Erin and Guy both have big and boisterous families and the reception and the subsequent party, disco and the drinking and blethering went on well into the wee small hours. Next morning (after a comatosed kind of sleep) those of us who’d stayed over in the hotel breakfasted and lunched together, relaxing and chatting after the previous day’s excitement. Erin and Guy are now jetting away to Thailand for a few weeks...
Posted by impossible songs at 9:57 AM
Email ThisBlogThis!Share to TwitterShare to FacebookShare to Pinterest