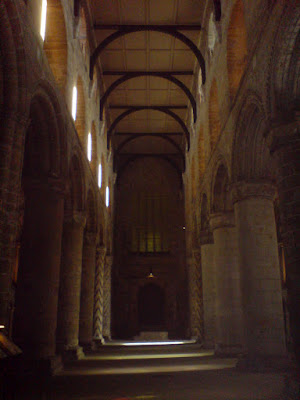 The inner sanctum and heart of Dunfermline Abbey. Optimistically built in spiritually better days some might say. (The spellcheck wants to make Dunfermline "downfallen" oddly enough).

As alternative holy week lumbers on and the confectionery industry applaud and German priests quake I offer the following advice for the seasonal searching masses and lost souls everywhere:
"In mathematical terms, if it were to be assumed that the existence of some god is certain, and if there are a number (n) of inconsistent faiths one could believe in, each with a corresponding Hell and no way to tell which one, if any, were true a priori, the probability of having chosen to practice the correct religion (through upbringing or by making Pascal's Wager) cannot be greater than 1/n. Therefore, if there are only two inconsistent faiths, then the probability that a believer of either faith is correct is 1 in 2 (50% or 1/2). Four inconsistent faiths result in the probability dropping to 1 in 4 (25% or 1/4). If there are five mutually exclusive faiths, then there is only a 1 in 5 (20% or 1/5) chance that the correct religion would be chosen and its believer would go to that religion's Heaven rather than to its Hell. In practice, there are hundreds of religions in existence, which makes it less than a 1% chance that the true religion would be chosen."

The problem of "avoiding the wrong hell" is an acute one for those earnestly seeking the truth. Good luck to you all, the odds are against you.

Back at the ranch it was fish finger sandwiches, what a marvellous warm feast to savour as we look out at the ongoing results of global warming and the start of British summer time.
Posted by impossible songs at 10:05 PM
Email ThisBlogThis!Share to TwitterShare to FacebookShare to Pinterest