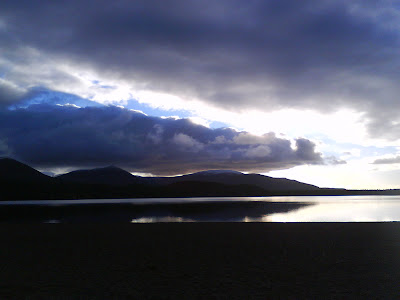 Loch Morlich as the sun goes down (not too far from the A9).
There something mad about driving on the A9, probably brought on by the mix of slow / fast / single / dual carriageway that confuses the average driver. When the dual carriageway eventually comes a feeding frenzy begins where cars jostle for positions frantically hoping to overtake anything that might be considered a slow moving threat to their opportunities to speed. Today I decided to avoid this type of behaviour and chug along at a steady and serene (and slightly illegal) 65 miles per hour maximum regardless of the other traffic. Truly the behaviour of a man no longer in a hurry and of a certain ripe old age and intellectual maturity. The fact that I think a speed camera may have clocked me (from a camouflaged flyover) moving at a steady 88mph last week on the M74 had nothing whatsoever to do with my new civilised driving style. So though the design of the A9 encourages bad driving that in itself is not an excuse. Time after time for some reason normal, sane people become unhinged in their cars and the A9 brings this out as they tailgate, misjudge, take risks and blatantly race one another. What to do? Bring back the old A9, choke the tourist towns, take the twists and put them back in, no overtaking from Perth all the way to Inverness and so manage the traffic back to a healthy 25mph. Everybody then drives a Morris 1100, wears a sensible pullover, carries a tartan flask and has a neatly folded travelling rug on their back seat...OK I've gone too far. 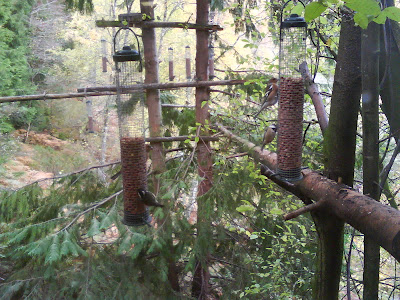 Many small birds munch their breakfast in a contrived but interesting and easily observed environment. As the birds eat seeds we eat cake on the other side of the window.
Posted by impossible songs at 5:44 PM
Email ThisBlogThis!Share to TwitterShare to FacebookShare to Pinterest