Creating in the kitchen 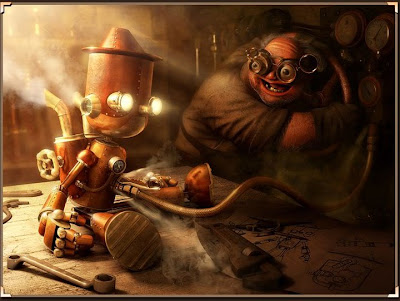 Of course I would rather be cooking up an actual robot or even an android (before the name was stolen by stupid phone companies, androids were chemically based robots that regularly appeared in some of the better DC or SciFi books and comics. Mostly they were stirred up in some steaming broth mix which I guess cooled and, though the mould process was never revealed the android version of whatever the real person was would be released in order to play havoc with the comic's plot. Then Blade Runner came along with replicants, which were of course androids but a bit more confused over their own actual identities and things moved on a notch), anyway I made some tomato soup from scratch. It may even have been a success, all soups need time to settle. Look for reviews tomorrow.
Anyway as it's cold out and the soup season is prematurely upon us here's the top TV tips for folks who like to stay indoors and sup:
Modern Family - brilliant show, reruns on now, new series on Friday this week, can they maintain the standard?
The Borgias - a clattering and less sensual version of the Tudors but full of maniacs and bad acting. The spectacle and CGI does work even if the cannons are unbelievable. Good diverting stuff.
Shooting Stars - the format is exhausted and it's quite unfunny and laboured at times to the point of being embarrassing, then along comes some completely daft and wonderful joke or sequence. Hard work but worth it. How come I can only think of three TVs shows?
Posted by impossible songs at 7:07 PM
Email ThisBlogThis!Share to TwitterShare to FacebookShare to Pinterest