Life, love and the end of social networking 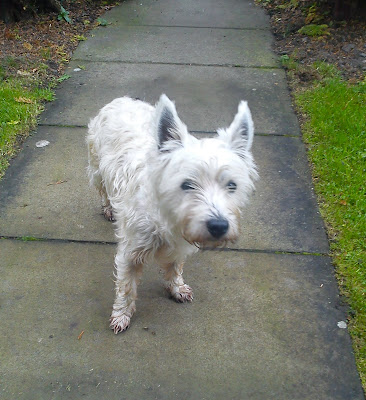 Molly the lovable dog from the big hoose always looks like she needs a good wash, which indeed she does. Today I decided against letting her and her mucky paws into our house as we'd just spent most of the morning Octoberfestingly cleaning things. Then the BT repairman arrived and order was restored.
Facebook's desire to morph into an even more irritating version of itself has caused me to reflect on the future of social networking, I think we've passed the peak and we're finally bouldering down the other side and into something possibly more straightforward and effective - just meeting people normally. This week we'd a pub meeting with friends, a music night and a meal in a local Indian restaurant with friends, all much more enjoyable than posting one liners and random status messages. 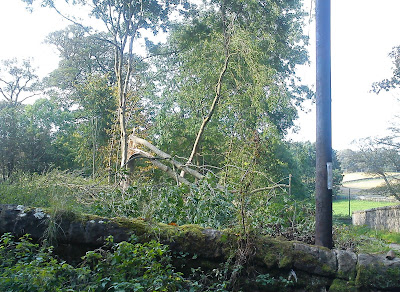 Every so often a tree falls in the forest and nobody hears it, here's one that fell earlier and presumably nobody caught the audio crunch - I certainly didn't, I was most likely engrossed in Newsnight, the Borgias or perhaps the Tom Morton Show. Bit of a shame really. This fallen tree is halfway down Badger Street, just up from Deer Lane if you'd like to come along and inspect it or respect it.
Posted by impossible songs at 3:52 PM
Email ThisBlogThis!Share to TwitterShare to FacebookShare to Pinterest