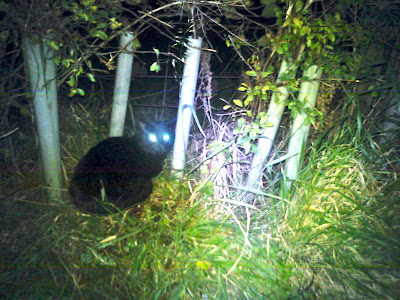 The local cat police were out last night and apprehended this little fellow in a nearby field, not quite sure what was going on, all we know is that this prime suspect said very little. His ginger accomplice, just visible in the distance (with max zoom) was a lot more vocal, we interviewed him later in a controlled environment, all he would say was, "honest, we were not up to no good officer but you need to talk to the badger". So we have two strange cats on a mission and on patrol around our manor and a crimeless victim, tension is building and feelings are running high. Clearly we need more moon juice.
Changing animals for a moment I saw a man out walking a small dog, "that's not much of a dog" I thought. Then I thought, "what is much of a dog?" I'm now on the look out; this type of thinking can apply to numerous other aspects of modern life i.e. that's not much of a TV show, that's not much of a portion of potted meat, that's not much of a political party, that's not much of a pop single, that's not much of a plan for the rest of your life. Try it yourself and see where it gets you.
I'd also like to quickly sing the praises of the green lentil, it may seem heretical you Scottish Soup fundamentalists but hear me out. Whatever made you think that ancient, spurious writings based on Middle Eastern mythologies were ever in any way applicable to Scotland or Northern Europe? I'll never know the answer but they got themselves bolted onto our lifestyle and have caused significant damage for about 1500 years - all relatively unchecked or challenged. In that time the great green lentil was tortured, suppressed and crushed but now it's ready to make a comeback. Gird your metabolisms for green lentils, pulse revolution, a brave new Christmas or whatever you call it, freedom awaits.
Radio Scotland: Playing music only fit to act as a soundtrack to the Highland Clearances and doing so since Marconi was a boy. Tune in today and hear the full accordion and fiddle based horror for yourself. 94.3 FM.
Posted by impossible songs at 7:21 PM
Email ThisBlogThis!Share to TwitterShare to FacebookShare to Pinterest