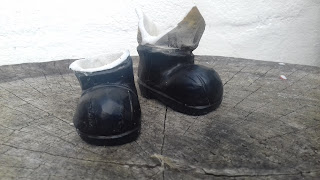 It's all an urban myth but then what's so wrong about a bit of mythology. What did Hemingway really do, say, write or drink? We think we know what he wrote but then ...who wrote the Bible or the Koran or Jane Austin's, Bod Dylan or E M Foster's work. Probably, maybe, possibly and perhaps it's theirs but maybe they stole it or shared it or it was from an alien life form nearby, transmitting. Clearly I don't know where I'm going with this other than trying to express some of the sense of the dislocation I feel with most media sources these days.

When the news is fake, the people are fakers and the audience (mostly) don't care, then anything can be said, with or without impunity and certainly without integrity. I for one welcome this absurd situation but absurdly I cannot support it. That's because most of what passes for news and the commentary attached is backed by spite, hatred, prejudice and unashamed self interest. It's not even any kind of amalgamation of conspiracy theories or parallel news, it's turkeys voting for Christmas, repeatedly. Who writes this stuff anyway?
Posted by impossible songs at 9:09 AM
Email ThisBlogThis!Share to TwitterShare to FacebookShare to Pinterest