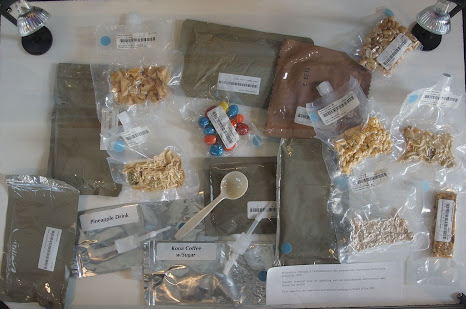 Going full on accidental Alan Partridge with this one; a TV cookery show pitch with a cruel twist. Celebrity chefs/cooks have to design a daily menu that will sustain life and maintain health on a journey from Earth to Mars (however long that takes but I imagine six months). The meals must contain all the essentials needed to survive and thrive but the menu must be repeated every day during the flight, there is no variation.

The twist is that, subject to the judgement of nutritional experts the winning chef must then survive on a Martian probe simulator eating only what was created for the daily menu. They are sealed into the simulator for six months with other err... well chosen victims (fellow celebs) in a Big Brother/Gilbert and George style space flight where the food choices are repeated every day. All filmed live etc. At the end the judges decide if the participants remained healthy as a result of the diet. Prize? Say a million pounds. Any takers?

Future series will of course feature an actual flight to Mars, post 2030 onwards.

Posted by impossible songs at 8:11 AM
Email ThisBlogThis!Share to TwitterShare to FacebookShare to Pinterest