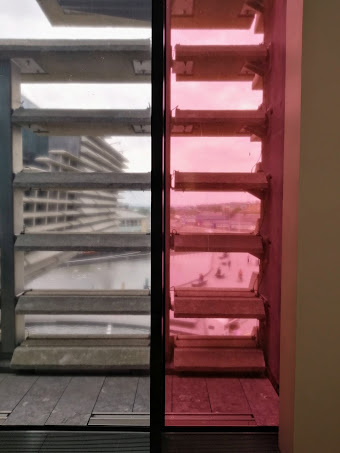 I've noticed that despite appearing to be composed of strait lines in concrete and wood, Dundee's temple of inequality and tone deafness, the V&A, is squint and cock-eyed in a number of places (if you look closely). Not sure if this some formal but informal style, a deliberate trick or just "how it all turned out" due to the vagaries of materials and settlement. It remains an enigmatic building that I continue to like despite myself, interesting on the outside, strangely full of wasted space on the inside and somehow unable to produce exhibitions with any kind of "wow" factor. Like some alien thing it just doesn't gel with the world outside and the city it sits precariously on the edge of. Fife looks on blankly as the V&A's tortured jaw butts out across the Tay with a silent menace.

The latest exhibition, entitled Disco (?) looks for all the world like it was pulled together from the 5th year school notes of some upper class kid travelling around Europe on her trust fund in the 90s. So it's mostly full of privilege signals, absolute pish and chatty tittle tattle ("here's my first ever joint in France etc."). Some might argue that it's worthy of being put out there as a record but frankly there's no connection in there that fits with Dundee life or Scotland's art scene, not now or in the 90s. The days when you could stick Polaroids on a wall along with old DJ flyers and Sharpie notes name checking your pals and call it art have I think long gone.

I wonder how long it will last before the plug is pulled.

Posted by impossible songs at 8:21 AM
Email ThisBlogThis!Share to TwitterShare to FacebookShare to Pinterest