They were called the "Whitedicks", Jane and Bobby Whitedick. Their's was an old European name, they'd traced it back to France where it seemed they were descended from the Blanc-Ricard family. A noble house that had done quite well for itself up until Napoleonic times. Somewhere along the line, they suspected when a great, great grandfather had landed in New York, the name changed to Whitedick. No one knew why it had been changed or clumsily translated. The English derivative would be Whytdyke, or so they understood, it was the old Saxon version. Family history was patchy, records had been lost and there was a bit of here-say in the detail.

When a TV producer friend was chatting to them a few years ago he seemed keen for them to star in their own reality show, "At home with the Whitedicks!" That was the proposed title. It never happened. They were all quite drunk at the time and in the end settled for obscurity. 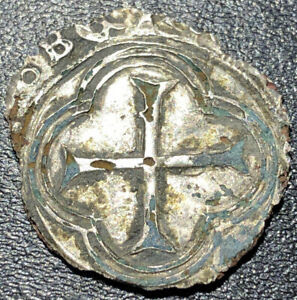 A coin of the realm.
"In no currently surviving art works, Charles Blanc-Ricard is portrayed as a shadowy figure, lost in the passing of history. He may have been an agent operating between kings, queens and red-cardinals. Passing messages, arranging meetings, sealing contracts and trade agreements with Australia and Darien. Today he would have been a spin-doctor and/or a special advisor. Born into the then upper-class Blanc-Ricard family, minor noblemen with lands west of the Loire Valley and up into the Vendee,  he was a sharp tongued and ruthless operator up to his neck in cheese. No biscuits. His wheeling and dealing eventually led him to the court of the King, Louis XII in about 1490. His career progressed via both complaints about his behaviour and compliments about his shrewdness. He made enemies easily but he also created alliances and dependencies. Common wisdom says that's how it works."

"Charles, via influence and factional bribery eventually caught the eye of the King and bit by bit became a leading advisor. He assisted with the King's "Pragmatic Sanction" ( The Pragmatic Sanction excluded the papacy from the process of appointing bishops and abbots in France. Instead, these positions would be filled by appointment made by the cathedrals and the monastic Hell's Angels chapters themselves). He also produced a devotional "Book of Hours" which the King grew to rely upon for his spiritual welfare and as an aid to his meditation and prayer."
"After a short but violent courtship, Charles married the Countess of Forte, they had two sons and two daughters, all of whom survived their parents. The Countess died of embarrassment in 1501."
"When the King Louis died in 1514, Charles found himself out of favour with the new King, Francis I. Charles returned to his estate and effectively retired from life at the court. As a gambler and confident card player he frittered away his remaining years. He passed on in 1527 following a strange incident where, after a night of normal medieval feasting, he hit his head on a low stone lintel and fell backwards onto the head of a pig that was being carried from the feast by a servant. The pig's head was on a spike and as Charles fell he landed upon the spike and was cleanly skewered from the buttocks through to his groin. The swift cut removed his genitals with almost surgical precision and he bled to death."
"Legend has it that the hounds of the household were quickly on the scene due to the smell of blood and instinctively picked up the genitals and ate them in front of the dying Charles while the servants stood back aghast. The offending  and indeed fatal pig's head was used to make a large pot of broth that formed part of the funeral buffet and was enjoyed by the many mourners who traveled from far and wide to attend."
"There are no records of any further peculiar events involving the Blanc-Ricard family until at least 1550. Something else almost as bad as Charles' fate  happened about then but it is unrecorded apparently."
Posted by impossible songs at 9:26 AM
Email ThisBlogThis!Share to TwitterShare to FacebookShare to Pinterest