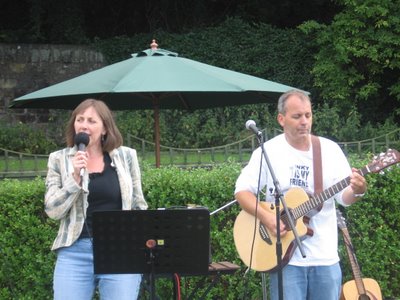 Thankfully the sun shone on a fairly unrighteous bunch of musicians and "Ferrystock" took place without a hitch yesterday in the open air. Thanks to all those who played: Cloudland Blue Quartet, Tommy Mackay, Confushion, The Sultans of Swine, Big Jim, Norman Lamont & the Innocents, Whyte & Mackay and us. We all had a load of fun playing in a spectacular setting, between the Forth Bridges and looking out onto Fife, and we made a few quid for the Ferry Arts Festival.

Thanks also to the Two Bridges Hotel - a really good venue and a grand day out.