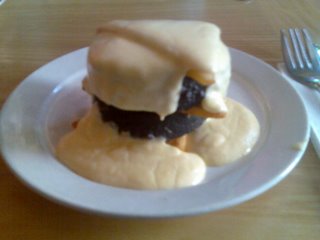 In a straight fight which one would win? The internally cool, glaciated, raspberry beret desert sauce and mysteriously crustational BA, (as served up by Henry from Detroit at the Hawes Inn, South Queensferry – who’d just bought an 1815 copy of Dumas’s the Count of Monte Christo). OR, The Central Scotland traditional, tattie scone sandwich and architectural folly of thick cheese sauce/blackest of black fest puddings/three scones triangulated by a Stanley Knife and piled high as a tyre stack, (as served up by a pleasant waitress wearing a little too much eye liner at the Bay Inn). In a height contest the BA wins by about 1cm. The width of them both looked about the same. Of course one is a starter, the other a desert. In a competition it doesn’t really matter anyway.

Wednesday: Various things turned up via the post, lunch at the Hawes (hence the Baked Alaska), a puzzling episode of the Simpson’s, a lost cardigan, a gift from a secret Santa, lighting the coal fire for the first time in months. I also discovered that I’m the only person on the planet who hadn’t realised that Torchwood is an anagram of Doctor Who, a reality check there. The spectre of Christmas getting closer but not seeming perhaps quite as daunting as it did last week – arrangements are coming together and I’m coming to terms with the inevitable. If there was no Christmas we’d just invent something else, possibly even more expensive, artificial and tacky to fill the solstice gap. We’re stuck with it, make the best of it.

Thursday: Thankfully amid the current chaos I’m not travelling anywhere, but some loved ones are. Fog and cold paralyse the nation easily it seems, or is it all just jacked up a little more these days?

Posted by impossible songs at 8:17 PM
Email ThisBlogThis!Share to TwitterShare to FacebookShare to Pinterest