The Christmas Angels are bored 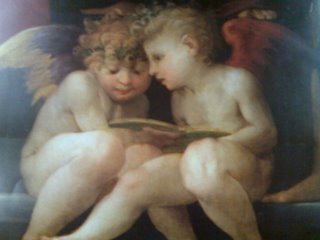 Saturday: Bought large Christmas tree and erected it in the lounge. Ali festooned the crippled fir tree with numerous flashing lights and bright shiny things. Meanwhile I poked a cable through the toilet window and nailed a series of Star Trekky light strips outside. From the outside the house now looks like a pizza shop on the Costa del Sol, but that’s ok. In the evening we snuck into the Priory to hear Norman L perform some fine new songs, a Robert Fripp guitar solo piece (really for a quartet!) and a Geordie folk song. We then were invited up and did an impromptu and polite version of our song “Rainbow” and also cleaned up some red wine that was spilled upon the floor by Santa Claus. Then it was a late night run up to Freuchie to view the new gas fire in all its glory.

Sunday: Awoken by an early morning phone call from work (I reacted to it at about 4pm). Visited Abercorn Church and the surrounding woods to forage for materials for Ali’s latest art project. A quiet evening in with the kids watching Mr H Potter.

Monday: Up sharp to take the kids to school, all on a light pop tart and tea breakfast. In the evening some frantic Christmas shopping at Craig Leith then down to Easter Road for an OOTB meeting at Scott Renton’s place. After a decent chat with the rest of the committee it was back home to help out with Ali’s artwork – which had moved on a pace. Will it be ready for Christmas?

Tuesday: Christmas lunch in Dalgety Bay with some colleagues from my office. A party seated next to us were from the “Angina Club”, that got me a bit worried. Then I thought, well it’s better than being next to the “Irritable Bowel Club” or the “Sexually Transmitted Diseases Club”. The tattie scone and black pudding tower, over which I had fantasised for a few days, was only just ok. I had visions of a real tower of tattie scones (ideally topped with a fried egg), a bit like an American pancake stack. What I got was not quite that, it was three tattie scones sandwiching black puddings with cheese. I guess it’s just the half hearted way we do things here in Scotland that bothers me. I recall visiting a series of pubs in the midlands in the 90’s called Mad O’Rouke's Pie Shops. Their speciality was an actual cow pie complete with horns, (a la Desperate Dan) and the traditional starter of Black Pudding Thermadore and the Pogue’s music thundering in the background – they knew how to please a punter. Hmmm...Home again for more wrapping, a cool Baileys and an invigorating spot of ironing.

Posted by impossible songs at 9:40 PM
Email ThisBlogThis!Share to TwitterShare to FacebookShare to Pinterest