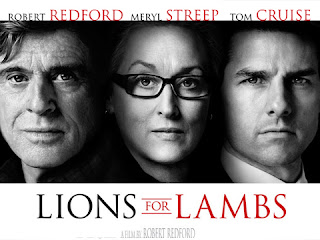 A cynical piece of Oscar angling, an honest wake up call, superstars reminding on and revisiting past glories, a left wing punch on the chin or Robert Redford playing god?

This film could be any of these things and more. It’s a rare thing in that it’s a film that leaves the viewer cold, hot, affected and dry-mouthed at the end – there are no cheap laughs or worthwhile thrills left these days. There is however hope out there, but not as we know or would like it to be. It’s a bleak and fragile hope and a reminder that all the “Eve of Destruction” rhetoric and posturing of the Cold War and the 60s hasn’t really changed much other than in image and location evolution. The stellar cast and their bright eyed intensity beguile the viewer and scratch the surface of memory, as if attempting a return to their halcyon days but are all ultimately, slightly beyond belief.

Robert Redford’s character, a caring yet detached college professor, is the most annoying and significantly thumbnail sketched portrayal within the film. The professor’s role in life seems to be to cherry pick and anoint his chosen movers and shares “for the best”. Redford plays the part like a flightless god, an observer and reluctant participant who’ll change the world through the longest game, a game he knows can’t ever be won.

Meryl Streep is the deeply concerned and conflicted journalist working for a news agency owned by a soap/hygiene company. She feels trapped in the narrow band of peak time news gathering and despairs over the lost integrity and shifting interests of both her employers and her audience. She also needs the money. For her any engagement with and spooning medicine out to the great American public is a daunting task, not even Mary Poppins could handle it these days. In the end she is just another butterfly broken on the wheel as the news story escapes her clutches.

Tom Cruise is the presidential wanabee, the slick grin and the language and the intensity are all picture perfect. His master military plan is clear, simple enough and to some believable, but as previous similar conflicts have proven, tragically flawed. People and circumstances quickly conspire to reduce a strategy that looks good on paper to yet another gung-ho military failure, the tracks of which will be covered by a blizzard in a few hours. Cruise’s character reels from the blow of the sharp reality of failure, but you know he’ll recover quickly. In payment an Afro/American and a Hispanic are the offered up to the mountain as sacrifices whilst the white middle classes ponder the future before scuttling back to their respective East and West Coast hideouts. Middle America is significantly missing in action in its lack of voice, opinion and representation here.

As a film it’s worth a watch, we caught it on preview earlier this week and it has held my attention since.
Posted by impossible songs at 6:22 PM
Email ThisBlogThis!Share to TwitterShare to FacebookShare to Pinterest