This is not here 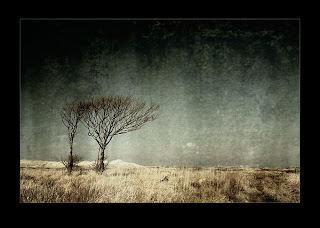 The middle of nowhere.

This is the most recent place we have been to in the ongoing (since August) search for Syrus our lost cat. Ten thirty last Tuesday evening found us in “the middle of nowhere” near a remote cottage on a hill top overlooking the Forth. According to a reliable source Syrus had been sighted crossing over the cottage’s garden a few hours previously. We spent an hour in the cold, dark and wet calling, stumbling and dish thumping in the wild and dark woodland outside the house whilst the sympathetic but bemused inhabitants looked on. Sadly the search proved fruitless, wherever he is, he is not wishing to be found just yet.

Another QF Arts Festival sponsored open mike night took place at the Stags Head in the village last night. Norman, Tommy, Ali and I set up the PA and then sat around chatting for an hour whilst nothing happened and nobody crossed the threshold. Then on the stroke of nine a plethora of performers arrived including guitar superstars and journeymen Fraser and John (aka Confushion). Some of the other willing participants were complete strangers (always nice), with original material which was an added bonus. Thereafter the night fairly got going and we had a good, lively two hour session of songs, music and jamming that would have lasted much longer if not for closing time and the organisers well established early morning routines. Nice when things work out.
Posted by impossible songs at 7:35 PM
Email ThisBlogThis!Share to TwitterShare to FacebookShare to Pinterest