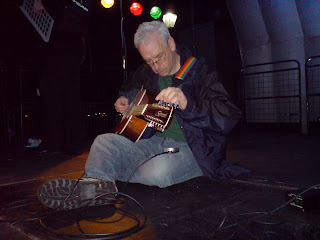 Above: Tommy Mackay - guitar techno-guru.
Below: The mighty stage rises from the Forth. 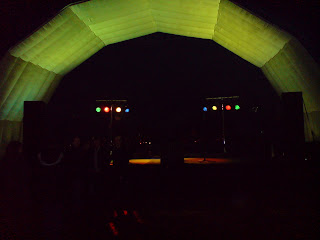 Ali and I drifted into the seasonal spotlight in South Queensferry tonight to assist with the pre-Christmas celebrations (?) by singing backing vocals on Norman Lamont's (or is it the Wright Bros?) rather clever song "Christmas Revolution". Tommy Mackay also assisted with the doo-whops after his own short and sweet performance. The magnificent inflatable and multi-coloured stage was littered with dignitaries, elves and brass bands and a howling (well moaning) gale was blowing in from the sea, a feature we've become used to around here. After that Tommy, Caroline, Norman and the Impossibles retired to the Boat House for strong drink, salmon, salad and pigeon breasts along with Spanish black pudding - a traditional Christmas treat in these parts. Meanwhile outside in the cold distance the fire works popped and sparkled as the children sang and had their own seasonal strops over undelivered Nintendo Wiis. I believe it is only the 2nd of December today, a long and busy month lies stretched out before us all.
Posted by impossible songs at 8:04 PM
Email ThisBlogThis!Share to TwitterShare to FacebookShare to Pinterest