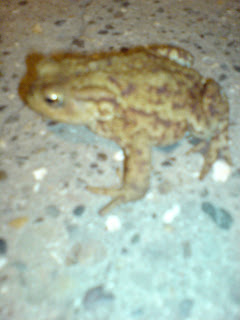 Finally caught on film (or phone) the holy and high king of Frogland & Hopetoun's image is revealed for all to see. This ancient, mysterious and wise beast lives, breathes and catches flies in our coal cellar and on our back step. Normally he is hidden but he will appear when it rains, at night or if the local cats are on the prowl and disturb him (or if we perform strange and primal incantations). His tadpoles are many and various, some have met sad and mysterious ends, some have made it to the lawn and beyond and a few ventured under the garden gate into the wide world and various roadway pot holes - beyond the trampoline. He may in fact be Queen of Frogland also but that is another matter altogether and we lack the expertise or motivation to explore the possible answer. I could be wrong but it is likely that his name is Mohamed, we will never know the answer to this, like so many of life's other deeper questions. Our human position is clear, simple and primitive while this grand king/queen frog/toad straddles the universe in an arc of triumphant lizard like amphibious power.
Posted by impossible songs at 9:59 PM
Email ThisBlogThis!Share to TwitterShare to FacebookShare to Pinterest