Avatar and the Princess 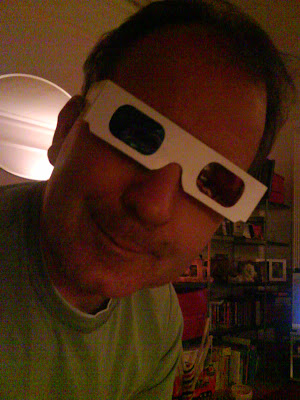 Ready for another stunning visual experience.

I’m quite looking forward to seeing Avatar in 3D, or 4D or E-motion or Supermarionation or whatever. As someone who still thinks stereo is pretty cool, in particular simple pot-pan ping pong panning, then anything beyond that is far out science fiction. The only problem I have is that the blue people all look a bit like that guy who played George of the Jungle and the rip-off Indiana Jones in Egypt. Something in the lizard eyes and pin point pupils that strikes a distinct chord. If it all turns out to be some Vietnam or Afghanistan guilt trip allegory then I’ve already decided not to make the connection, that’s half the trouble with Hollywood, intellectual credibility has to be built in like the keel on a ship so the project stays upright. Quite unnecessary.
When its minus 3, foggy and gloomy it’s hard to mount a convincing argument for global warming far less start a good riot in Copenhagen to try to make your point. The people who feel guilty about picking up a plastic bag in a supermarket will casually board a jet to Birmingham or Bali without a single thought, I should know I’m one of them. Sobering then to think that one decent volcanic blast pumps more CO2 and resultant earth excrement into the atmosphere than any Ford Zetec or BMW V8 could do running up the fast lane of the M6 at 95 for a year. Why don’t we just dump the rusting fridge mountain into some hyper-active crater somewhere and so neutralise and short circuit the whole process.

And so another Princess Diana moment comes along. That golden time when you realise you are out of step with popular opinion and interest, you are out there, on a limb, aware but uncaring as the awful mess of mediocrity that is the current X-Factor washes over the nation like a cocaine and morphine syrup.
Posted by impossible songs at 9:18 PM
Email ThisBlogThis!Share to TwitterShare to FacebookShare to Pinterest