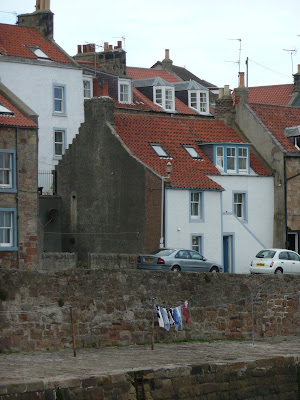 The top window on the right was the window of my first bedroom, circa 1955 in Cellardyke, Fife. Everything then was of course set in black and white (425 lines) and mono, today we live in a far more colourful but also more confusing world. Many things have changed since those days, I certainly don't recognise the washing in the foreground.

I thought that the bacon that I had in the George Formby was sizzling nicely, then I realised that it was the cats spitting and hissing at one another. I've decided to rename them for the festive season: Silly, Goody, Oldy and Baddy. Strictly speaking Baddy is not our cat, he is a stray who sneaks in through the cat flap in the wee small hours and eats up all the remaining cat food in a feeding frenzy, a bit like Goldilocks except she was a fictional girl and not a cat. Baddy also has the other cats terrified because of his stealth, his trickery and his sophisticated psychological ploys and plots, like eating all their food.