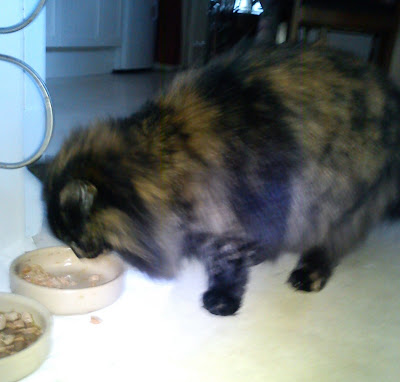 "Another frustrating and humiliating day; as usual I return from rodent patrol hungry and have to gain the attention of the two regular humans in my house so that they might address my plight. All I want is a simple portion of Tesco mutated chicken but do you think they get it? The softly spoken one who smells nice, pats me and talks to me, wasting precious time. I rub against her legs and feet and purr a bit but she just calls me "princess" or some other soppy name, not much bloody use when you are hungry! Sometimes I have to sit right on top of the plastic screen thing that she tip taps on before she pays any attention at all and then she just looks at the tuggy fur on my bum or claws at under my chin."
"The other human, who doesn't smell so nice and tends to make loud, unexpected noises is easier. For one thing he's always near to the large white box where the meat is hidden. If I make a kind of pathetic squeak he usually responds but I have to wait until he's fed himself first, greedy bastard. Then he talks to me but it's sing-song gibberish and the tone is irritating, like a dog fart echo in a subway. He's not really suited to house sharing with the more sophisticated life forms and higher mammals. Did I say that he's all fingers and thumbs with the food packets? What an Oscar winning performance he makes of getting into any sealed package and if I'm not careful Anna the other cat (the old weird one who once had a part in the Simpsons I think) hovers near the food dishes in that stupid geriatric way that old folks do. Has she no self awareness at all? She's only got one gawky, black tooth, proper puts me off my meal sometimes and she's continually whining on about the past and her chronic bowel problems. Who wants to hear her coffin dodging medical history? Good God it can be tough around here and don't even get me started on the totally soporific, one brain-celled Clint, where did they get that ginger dumb-ass from?" 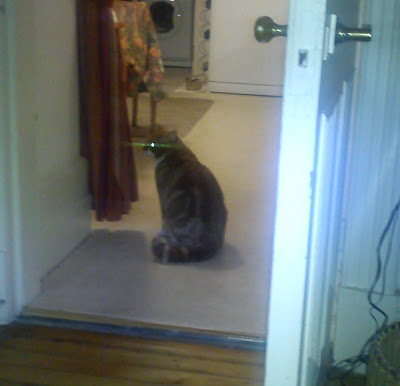 "Oh yeah, this guy's a local dosser and free-loader, he comes in a few times a night and eats the left-overs. What a dead beat! The human that smells nice and listens to Quincy Jones and Simply Red (ugh!) thinks he's the bees knees but basically he's just at it and the humans don't get it. Note the evil-eye glint in the photo, that pretty much sums him up. Anyway I'm headed out of the back door portal, they've been out feeding the birds in the garden, how thick are these people?"
Posted by impossible songs at 3:21 PM
Email ThisBlogThis!Share to TwitterShare to FacebookShare to Pinterest