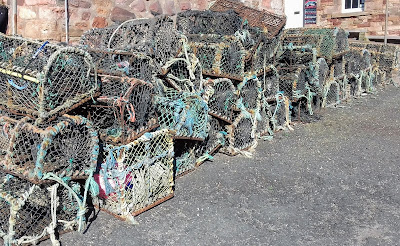 I typed this out (below) the other day whist suffering from the distorted belief that I had something to say. Now none of the earworm words will go away. It followed a brief visit to the village of Crail, where the ice cream shop is closed but the toilets are open. Where the roads are narrow and the sea is rough (wide?) and the expected "tourist" types wander here and there sipping coffee, peering through sunglasses, adjusting their scarves and pullovers, squinting into the wind and consider the prospect of retiring to a place like this one day (assuming they don't already live in one).

That's not to say I'm critical of these folks, they belong wherever they want to belong. They do seem however to take their style and mannerisms from elsewhere, as if they've learned it rather than earned it. They arrive and then they exhibit. Maybe they've seen too many French films from the 60's or read certain arty magazines, maybe they've just slipped through from another dimension and are trying to fit in and just quietly live their own unobtrusive but alien lives. I'm not sure of anything...

The pots that trap the jet black lobster,
laid out here by come Crail based mobster.
Not for him the simple, juicy oyster,
just chilled, unwilling North Sea lobster,
for the eating pleasure of some punter.
Posted by impossible songs at 2:06 PM
Email ThisBlogThis!Share to TwitterShare to FacebookShare to Pinterest