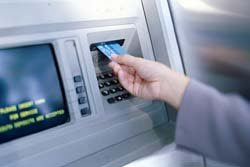 In a rare non-industrial accident yesterday I got my finger caught in a cash machine. You could in fact say that the HBOS machine bit me whilst all I was doing was removing a legitimate wad of cash from it's innards in the normal way. For a moment I felt like an alien or outcast who had never encountered these things before and now saw it as an enemy, jumping away from them, dodging them or running quickly by when passing one in the street. There's the germ of a sci-fi plot here I suppose, with people consumed by angry, rampant cash machines all over the world. Thereafter the world ends and the cash machines rust away quietly.

I also wore a jumper inside out for a while quite unwittingly and got soaked three times in various cloudbursts. Not the best day ever.

Posted by impossible songs at 10:42 PM
Email ThisBlogThis!Share to TwitterShare to FacebookShare to Pinterest