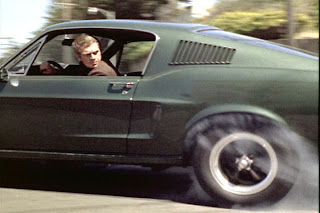 I don't know why but the story of Steve McQueen's struggle against cancer and his desperate battle to beat it using unconventional methods has always intriged me. McQueen was the loner, anti-hero type in many of his films and chose to take a similar unconventional path in a bid to beat his illness. None of what he tried worked and McQueen died at the age of fifty in Ciudad Juárez, Chihuahua, Mexico of a heart attack following surgery to remove or reduce a metastatic tumor in his lung.

He had been diagnosed with mesothelioma in December 1979, and had travelled to Mexico in July 1980 for unconventional treatment after his doctors advised him that they could do nothing more to prolong his life. McQueen was cremated, and his ashes spread in the Pacific Ocean.

Mesothelioma is a form of cancer usually caused by asbestos exposure. McQueen may have been exposed to asbestos during his service in the United States Marine Corps, or during his racing career.

Strangely McQueen sought a very non-traditional treatment that used coffee enemas and laetrile, a supposedly "natural" anti-cancer drug available in Mexico but not approved by the U.S. Food and Drug Administration, the method failed to stop the cancer. For some reason his brave and possibly stupid attempts at finding a cure made him more of a hero to me than any of the roles he played in his movies.
Posted by impossible songs at 10:30 PM
Email ThisBlogThis!Share to TwitterShare to FacebookShare to Pinterest