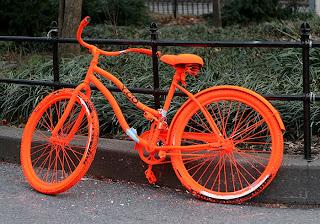 This bike is nothing to do with anything but reminds me of Amsterdam and Yes.

I spent a day and night in Gretna, the day being the one that the football team needed £30k to survive. I was working however and couldn't/wouldn't stump up the cash anyway. I stayed in a hotel that was like a Dobbies garden centre covered in fairy lights and tacky photos of the many weddings that had been held there. Each one less romantic and more desperate than the next I thought. Too many weddings in one place is not good and repeated images create a picture of tedium and blandness, don't get married there. It also rained a lot and found it a hard place to like apart from a good shoe shop set in a damp retail outlet mall.

The charge back up the M74 was uneventful but wet, soaked in lorry spray under an eventually dark and broody sky.

Garlic mushrooms.
Crossing borders quickly.
Easter egg shopping trips.
Cold hotel rooms.
Cats chasing mice into houses.
Traffic.
Facebook.
Dipping scotch egg segments into sweet and sour sauce.
Hanging clothes up in your car.
Taking short cuts.
Forgetting the name of the hotel you are staying in and having to stop at each one in Gretna to find the one you are booked into. Then seeing someone you know at a hotel, thinking that it is the one you are staying in and then finding out that it's not but another 100yds up the road.
Being late because you cant find your hotel.
Posted by impossible songs at 9:50 PM
Email ThisBlogThis!Share to TwitterShare to FacebookShare to Pinterest