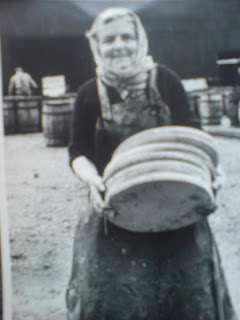 My recent reminders on family matters and family history has brought back the clear memory of a formidable woman who I hardly knew but by reputation was to be a significant influence in my early life. The lady is Mary Jane Barclay (nee Geddes) my paternal grandmother, born and bred in Buckie in the North East. She died in 1968, probably not too long after the above photo was taken in Lerwick in the Shetlands. In it she is doing what she loved best - working outside on a fishing quay.

Her mother died when she was 14 (in 1902) and Mary Jean brought up her four sisters and only brother whilst looking after her crippled father. I guess she did the only thing she could and learned how to gut and clean fish in the local fish market in order to bring an income into the household. They all survived and she married into the Barclays in 1915 and brought up three children of her own but the call of the sea (the smell of fish?) was always there tugging at her sleeve. Right up until the mid nineteen sixties and in her late seventies she'd wander away with a huge suitcase and in a fox fur coat for seasonal employment from Lerwick to Lowestoft cleaning fish. It was what she knew, what she liked doing and she and her many friends (all ladies of a similar age and background) never wanted to stop doing it. Damn the pension, the comfort and the couch!

Sadly the herring boom years did not really last past the nineteen thirties and though she always found work I guess the fishing and landing patterns changed and the volumes decreased. Modern, intensive fishing methods, greed and lack of vision saw the fish stock diminish and the "art of the fishwife" die out. I'm not sure what she'd make of today's EEC quotas, the drug running and smuggling, the fish counter at Tescos or us eating prawns and shrimps by the bucket from M&S in the old days the fishermen threw them back as there was no market for shellfish. Tastes and times change and Mary Jane's craft, wit and guile has gone forever.
Posted by impossible songs at 5:27 PM
Email ThisBlogThis!Share to TwitterShare to FacebookShare to Pinterest