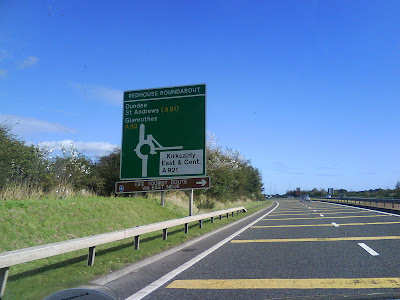 The road and the miles to Glenrothes. A popular folk song round these parts.
Food: After resolving a brief misunderstanding with the trouser buttons on a new suit purchased for work I realised that an emergency diet was not now required. I celebrated with an apple, beer battered chips and some chicken nuggets and two episodes of the Simpsons.

Songwriting: Having a real piano in one room and a drum machine in the other both playing loudly may seem like an odd combination for instrumental locations but it seems to work. We tried it last night, the drums thundering at a stately 86 BPM in the dining room and the piano plunking away in the lounge, strange chords and melodies arose while I sat in the middle gently strumming on a dobro. In the end some good music was created and will be completed and recorded one fine day.

Priorities: These are things that tell you what you should be doing next but can never quite get round to, often people, time and cash dependant and subject to short notice changes and unplanned adjustment. It's nice when diet is less of a priority that piano plinking.

Dead pedals: Wasted two hours yesterday trying to figure a power failure in the pedal board - all it takes is one cable round the wrong way...blame in on the slow but steady expiring of various cherished brain cells.
Posted by impossible songs at 9:56 PM
Email ThisBlogThis!Share to TwitterShare to FacebookShare to Pinterest