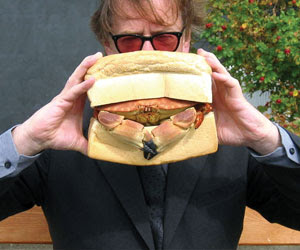 A She-Hulk picture that I like but is not relevant to tramp and lady themes.
I woke up this morning (as has been said many times) with "the lady is a tramp" running around in my head (the song, not wide-eyed cartoon dogs). I realised, as my version of the lyrics replayed within the great grey place of thinking, that I didn't understand quite what the song is/was about at all. That same deep lack of knowledge applies to a load of other songs, aka the big pile of misunderstood or not understood songs and lyrics, not even my friends at Wikiland can help out. I remain as ever an ignorant and useless lyrical correspondent.

Some people were upset, angry or possibly spitting out their pies over Jonathan Meades' "Football Pools Towns" docu-babble on BBC4. "Negative and ill-informed and unbalanced" some said. Not me however, it's tone was a kick in the footballs for Fifers like me (we become used to that) but in other bits, particularly on council house architecture, the decline of community and the aftermath of the Scottish industrial decline it hit the penalty spot. Truth is sometimes best served up by itinerant strangers and then left with us, like an unexpected present or time bomb. After an appropriate period of reflection it may all make sense...

"She gets too angry for Corrie at eight, she likes the bingo, puts the sugar on the slate, she never bothers to clean out the grate, that's why the lady is a tramp."
Posted by impossible songs at 9:32 AM
Email ThisBlogThis!Share to TwitterShare to FacebookShare to Pinterest