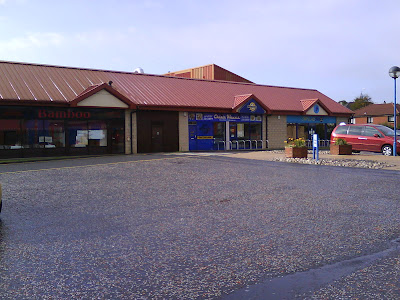 Business is booming as the good people of SQ flock to the local commercial sector.
The cultural and financial centre of the 'Ferry, part of the great Co-op Scotmid empire flanked by a Chinese restaurant, curry shop and peculiar clothing retailer. I always feel guilty about not using the apparently unloved Co-op, set in it's dreary car park and flanked by nothing in particular. It is compromised by being half a mile away from the larger Tesco that sells everything cheaper and is generally much busier, leaving the poor old Co-op forlorn and abandoned looking - but it does contain a proper post office. The trouble is you can never quite get the stuff you want in the Co-op, the TV ads portray nice green and ethical ranges but when you get in it's just miles of Irn-Bru promotions, stale looking cakes and very tired out and pale vegetables. I just have to learn to live with the guilt of regularly going elsewhere.

We watched "Burn after reading" last night, a fine portrayal of mid-life crisis, greed and paranoia with a lot of added laughs. Watch it and see numerous car crash situations come alive before your very eyes and then spontaneously combust. The names were no doubt changed to protect the innocent.

I uploaded three random tracks onto Amie Street last night, less than 24 hours later the money has already started rolling in, well almost. It's such fun being part of the modern, dynamic and completely unpredictable music industry.
Posted by impossible songs at 4:44 PM
Email ThisBlogThis!Share to TwitterShare to FacebookShare to Pinterest