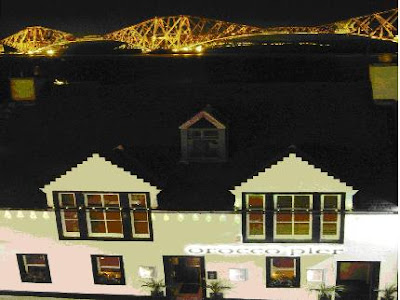 Sitting in a Skoda taxi following the hordes of revellers and assorted out of town wedding guests down to Orocco Pier for an evening of unrestrained revelry, pulling faces, losing the toilets and making up funny stories. The Orocco, that once locally hated haunt of a type of clientele that even now remains undefined other than it was non-local, has transformed itself into a bigger and cheaper version of the previous incarnation. I remain confused. Anyway it does now lend itself better towards acting as a meeting venue for the elite members of the South Queensferry and Compound Literary Mafioso, we can wine, we can dine and we can almost hold a conversation somewhere in the shadows under the sonic umbrella of booming and almost unrecognisable eighties tunes.
I’m not sure that snobby food critics would even cross the threshold because there is no illusion of artistry or scaling the sophisticated culinary heights with it’s cheerful bar food and bulging wine glasses. “Is that a large wine sir? After all it is Friday isn’t it.“ I was so grateful to be patronised and reminded of the day having become increasingly bewildered by time speedily passing as the end each remarkable week of my life approaches. Good to see the health police and the alcohol standards people are not writing the staff scripts, that grim, self righteous, eager beaver, devolution based day will dawn soon enough however.
They do big fat chips as well.
Posted by impossible songs at 2:11 PM
Email ThisBlogThis!Share to TwitterShare to FacebookShare to Pinterest