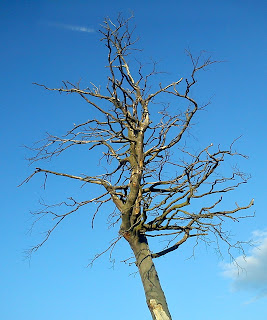 Carrying on the ghost sighting/footsteps thing I spotted this fine example of a ghost tree over in Fife. Of course it's more of the dead shell or remnant rather than the ghost. The actual ghost is way across the fields looking out for some unsuspecting sapling, I'm not sure why. Come the next strong wind it'll be over and blocking the road.

Referring to this tree and some other examples I sensed quite a few ghost footsteps on this short trip, overcast rainy memories and long oily coats, there were two people taking a walk, inland from the coast, one was foreign, the other claimed to be a religious man but I have my doubts (as did he). They were traveling in a huge circle (a woman was also involved but I couldn't quite get the detail), 22 degrees of which were in Fife, the rest spread across a far wider area. Sometimes all the things, books, Steampunk, careers, mud and heritage all collide and inform if you just turn over a few stones. Amazing what you can pick up if you just look and listen.
Posted by impossible songs at 8:51 AM
Email ThisBlogThis!Share to TwitterShare to FacebookShare to Pinterest