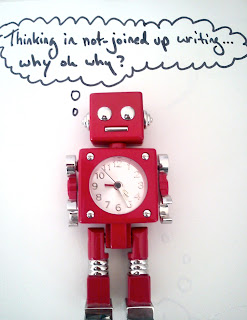 Storm: I'm looking forward to my first storm, watching it through that window, slowly building, hugging a hot coffee as it arrives with white topped waves, spitting and angry rain, sounds of thundering and swooshing, a strained wind that tears at trees and roots, forces pushing grass aside and rattling the glass in the frames. I'm nursing the idea of being warm indoors watch the storm, staring at the clouds and learning their names.

Sea Monkeys: I'm not clear on why sea monkeys should rank so highly on search engines all year round. Perhaps it's the combination of words, lots of dry people searching for the sea, lots of monkey obsessed monkey lovers searching for monkeys, nobody actually searching for the product know as Sea Monkeys though. That's the power and the confusion and the contradictions of the Internet for you. N.B. Real monkeys and the real sea(s) are both better researched out with the constraints of the Internet.

Robot Voices: Behind us we leave a trail of words, often badly spelt, poorly pronounced, subject to grammatical error with meanings and structures stretched beyond recognition and general serial misuse and ignorance. Add to that a wakeful of slang and swearing, sentence bombs of inappropriate and lazy speech and incorrect intonation and phrase construction. People can be very cruel and abusive towards words and language failing to see and appreciate the true beauty of clear and simple verbal communication. Thankfully (if properly programmed) this is not a problem you get with robots, they always speak properly, accurately and economically, as far as their human masters actions and silly mechanical robot voices will allow. That's just another factual type of observation here from me to pad out Robot Week.
Posted by impossible songs at 2:45 PM
Email ThisBlogThis!Share to TwitterShare to FacebookShare to Pinterest