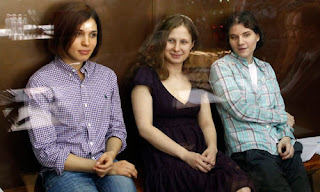 I watched the latest Pussy Riot video on the Guardian website it begins of course with a ten second couch commercial for DFS or some thing like it, there's no opportunity to skip it either. It's little things like couch commercials set against political messages and the tale of an (obvious) injustice that I find unsettling. Here am I reading the news for free on their website, they add a Pussy Riot video to the story and so that it works the whole news promulgation thing is financed by a soft furnishing company in the UK. I imagine that DFS aren't all that bothered about their struggles against the Putin Regime or punk music or the ridiculous and outrageous sentence of two years in a Russian jail.  Another disturbing example of the constant juxtaposition of the banal, the serious, the tragic, the funny and the odd, that's the media and the Internet.

As for the girls of Pussy Riot, their music is terrible, not even good bad punk. It sounds like a squadron of MIG21s crashing down on a Lada factory and reverberating across the frozen wastes of Siberia for a long time. You just want them to stop and stick with a bit of quiet protesting and so pass their message minus the headache inducing thrash of badly played instruments. Maybe Putin was right about putting a swift jackboot onto their tunes (although I'm sure he quite likes the accordion so he's no music lover), but of course it's not about the quality of their songs, it's about something far more serious. Hopefully that message wont be silenced. 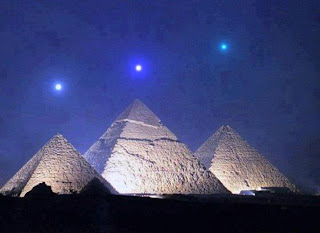 Once every 5050 years the three Great Pyramids line up with the Moon, Mars and Venus. The event has a mystical name which for the life of me I cannot recall. It's all worked out just as the ancients had planned it, they knew their stuff. Luckily I had my camera handy as I passed by. If only there were some ancient Egyptians alive today to see it all come together.
Posted by impossible songs at 5:51 PM
Email ThisBlogThis!Share to TwitterShare to FacebookShare to Pinterest