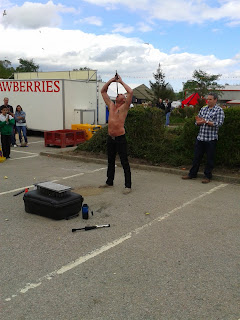 There are only sixty genuine sword swallowers in the world. Here's one I saw at the Taste of Grampian  food fare and sword swallowing extravaganza in Inverurie. He's also Scotland's only practicing SS performer apparently. Long live the eccentric and scary world of street theatre I say. N.B. this guy also eats fire, juggles knives and does the old bed of nails routine - all whilst telling quirky jokes. He didn't have his cat with him on the day.
Posted by impossible songs at 8:44 PM
Email ThisBlogThis!Share to TwitterShare to FacebookShare to Pinterest