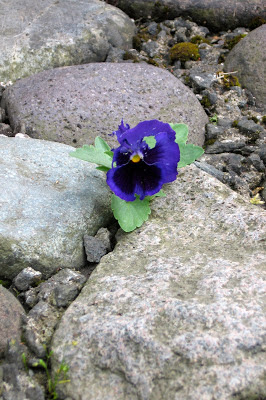 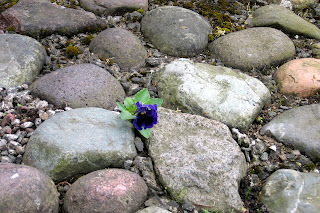 An old legend has it that once, on the pilgrimage route between Cramond Island and Oakley a poor beggar sat begging at the ferry landing at La Punto de Cromby on the the dark and gloomy northern side of the river. Everyday he was there, holding out a rusty tin cup in the cold salt air begging for alms from the passing pilgrims and passengers. One day an arrogant  rich young man travelling on the holy way passed and cursed the beggar casually throwing some dirty seeds from the bottom of his pocket into the empty cup. The beggar responded by blessing the man with the words, "You fail the Deil and I with your disrespect, the Wolves of Fife shall stretch your neck!" Angry at the retort the rich man had the beggar flailed alive at the root of the ferry pier. Some say that as the beggar breathed his last the howl of a lone grey wolf was heard from across the barley field as a new moon rose. The rich man continued on his journey eventually making it to the Priory of Oakley where he spent a troubled night. Next day the beggar was buried in the common plot but his few belongings were scattered to the four winds. In the process the seed the rich man had cursed him with  fell onto the stony ground that formed the base of the pilgrim's road.

The rich man completed his pilgrimage but found no lasting peace. On his return journey back to Cramond, miles out in the Forth the the ferry struck the Beamer Rock in thick unseasonal fog and sank with the loss of all. A few days later the rich man's body was washed ashore and on a some chilly morning devoured by a pack of hungry wolves near to Dalgety Bay. So now, at the spot where the beggar died some say those cursed seeds still take hold once in every 35 years (the age the beggar was when he was killed) and bloom there on the cold stones somehow, from the beggar's spilled and still warm blood. They rise up, defiant through the rocks and ruins, a testimony and tribute to a poor Fife beggar and in warning and remembrance  of the quick and unjust anger of a rich man - and in the nearby woods, the great grey ghost of an old Scottish wolf still cries alone and prowls unseen in the June half light. Well some say that kind of thing anyway.
Posted by impossible songs at 5:49 PM
Email ThisBlogThis!Share to TwitterShare to FacebookShare to Pinterest