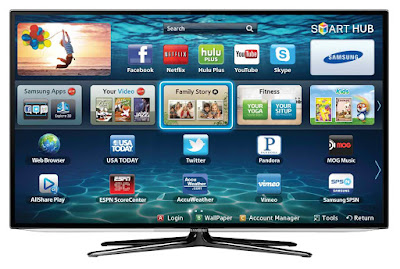 Anything good on the telly tonight?

Last night we watched the final episode of Taboo on proper TV, almost in real time apart from a 14 minute live pause while the tea was brewing or was it that the internet was playing up? Either or neither. It ended in a mess of adult themes, 19th Century explosions and unanswered questions I haven't even asked yet. A second series beckons assuming sales are good internationally. For us that was Saturday night TV (apart from an exception solo couch surf as Hibs and DAFC pelted each other on BBC Alba along with a Muppet inspired commentary in some guttural language).

There was a time when you sat down in front, or slightly to one side if you were an adult and watched TV all evening choosing carefully between the two available channels. The snobbish and imperially posh BBC or the more glitzy but clearly less artistic ITV. ITV was of course peppered with adverts which still were a new and slightly unusual thing, a punctuation mark that allowed kettles to boil, toilet breaks or shifting between couch positions. Crowd gathering TV watching was particularly prevalent on the big weekend nights when any amount of cheeky, chirpy black and white stars would gather in studios or theatres and lay down all their best comic and musical chops along with over enthusiastic and sprightly dancers. Then there might be some big film with Robert Mitchum or Lee Marvin, sparkling and/or turgid situation comedy, grim and muddy sporting events and of course the news and weather.


Oh! how we laughed and clapped our pink palms together as the state and private enterprise fought over the opportunity to entertain us in the beastly masses. The whole thing died with a kind of dwarf star effect at about 2330 when a minister or priest seated in an armchair performed the last rights and declared the day over as if he'd been in our living room supping tea for the entire evening. Then a white dot took his place and a low hum was emitted from the hot and glowing valves in the TV chassis until you stood up, walked over and switched the monster off. Bed time now with only the radio (the Light Programme) to look forward to in the morning, unless you liked watching the test card and horse racing.
Posted by impossible songs at 11:33 AM
Email ThisBlogThis!Share to TwitterShare to FacebookShare to Pinterest