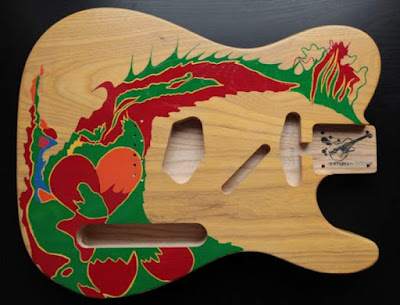 "A small matter of time" or why guitars can be expensive but maybe not too expensive 'cos your precious time is considered cheap or perhaps not even considered at all .

So in a typical 360 degree turnaround brought about by a fallow inspirational period I've returned to doing a pyrograph version of the famous painted version of the JP Telecaster Dragon. That's all, it'll take me weeks of draughting and fiddling I know, then I'll finish it. Then I'll try to sell it on Etsy but nobody will bite. Then I'll look at it again and change something or re-fiddle or realise I've missed a keen detail or some simple nut/bridge/pickup modification that'll make it so much better once fixed. I'll withdraw it from Etsy and substitute it with another totally different Partscaster that stubbornly won't sell.

A few weeks pass. I'm looking at it and I notice another mistake, I'll fix that something that was misaligned, the one I didn't pick up on the first pass. Then I'll try to sell it on Etsy again but nobody will bite but there will be a few likes. By then I'll get to like playing it a bit more and will decide that no, I'm not going to sell this one, it's a keeper. Then I'll decide to sell it on eBay just to see whatever level of interest there is, aka Market Testing. That'll take weeks and remain unresolved, a few watchers, some chancers hoping to get the guitar and resell the parts, some insulting offers but no proper takers. I'll try that old stalwart Gumtree next, nope, just a snotty inquiry from a fellow in Stirling and a torrent of abuse from a kind chap in Lochgelly. Time-wasters of course, Dr Who has not yet defeated them. Perhaps I'll explore other vendor sites or commercial directions, ho hum.

So I'll kind of forget it for a while, procrastinate and get on with my life, might take a holiday or two. Then after a few years have passed (other guitars will be sold in the mean time because I remain a committed optimist) I'll die some kind of mysterious but predictable death and the Dragon will be passed on to someone in my family who will decide that though they like it there are other guitars in the collection and perhaps it would be better just to put it on eBay and ... 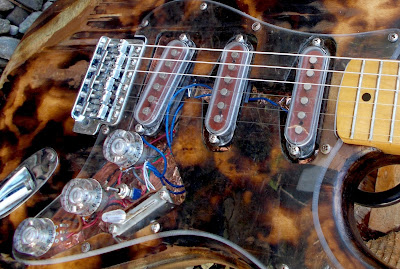 In other related news this half naked bad boy will be up for sale soon.
Posted by impossible songs at 5:03 PM
Email ThisBlogThis!Share to TwitterShare to FacebookShare to Pinterest