The film crew strike back 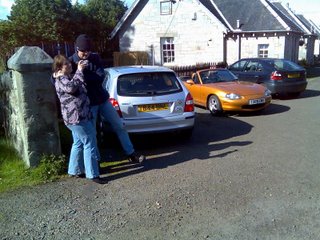 Film Crew up to something


The Confushian film crew use Upper Parkhead as a surprise location.

Fraser and Karen (the guerrilla Confushian film crew) took us by complete surprise and into mental hostage yesterday by carrying out some extra filming for parts of their “Conspiracy Theory” video (check the Confushian link on the right). Using a mixture of garden equipment, sports cars, trampolines and West Lothian’s ample sunshine the impromptu shoot seemed to go well, I marvelled at the couple’s enthusiasm and creativity while Ali donned her favourite sunglasses and quickly got into the act for a small cameo role. We eagerly await a full viewing of the finished product and of course the red carpet at Cannes next year.

The location shoots also uncovered all sorts of marvellous vegetation in our woods, a million swarming tadpoles, tiny wee fish, oak apples, numerous nettle stings and the added attraction of getting lost in your own backyard (for a few moments). I also got the chance to play the bouzouki badly for all of five minutes while Fraser grinned and stood by.


Crow Wars II (The return of the Jackdaw)

One upon a time in a garden far far away,
Strange alien beasts with black hearts ruled,
But an unlikely alliance of humans and tiewrap is fighting back,
The way of the lacewing, the peanut and the corn,
Shall prevail.
The feeders are stronger, the crows are darker,
The jackdaw cleverer, the food gorged more quickly,
The seeds spilled and upset, the sky torn,
The innocent victims scattered, an apple in the middle,
The crows are six, like black riders,
To curb their obsession, to silence their cackle,
The war returns, the fight continues…

Posted by impossible songs at 10:45 PM
Email ThisBlogThis!Share to TwitterShare to FacebookShare to Pinterest