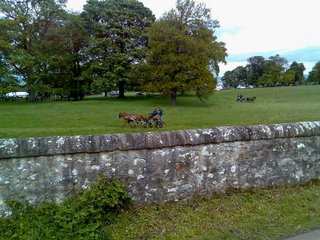 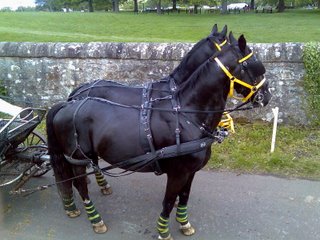 Three pigeons and Jake the jackdaw.

In the Crow Wars an uneasy truce has been declared. The crows have stopped coming over because we stopped putting out food. I decided today to put some out again, after a week of nothing. I deliberately put something out for the crows and strengthened the feeder for the small birds with cable ties. It seems to be working albeit that the Jackdaw (the real brains in the crow army) is still able to take food from almost anything at any angle. We’re also hoping that the higher insect count (the garden is buzzing) will aid the smaller birds, give them a new source of food and so still keep them coming around.

Hopetoun Horse trials are on this weekend. Numerous horses and buggies are clip clopping around at the end of the road as they work up their times for circling the estate. I pulled Ali from the bath in order to see Prince Philip canter by; alas she missed him by two minutes due to wet hair and no clothes. The twins and I stood on the wall high above a deep nettle bed and observed the royal visitor from a few feet driving four of the Queen’s best ponies as friendly helicopters buzzed over our heads.

“Popcorn” is not yet an Olympic sport but I’m sure will be one day. Simply sit in the middle of a trampoline, cross-legged and holding your toes. The other participant / opponent then jumps around you while you try to hold onto your toes. The idea being to last as long as you can without letting go of your ten little pigs. I am easily the best and the current undisputed Upper Parkhead champion. I am also exhausted by the effort.
Posted by impossible songs at 9:16 PM
Email ThisBlogThis!Share to TwitterShare to FacebookShare to Pinterest