The party is over... 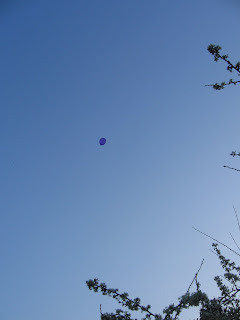 Our house warming party on Saturday turned out to be a real success. Ali had been building a better beast of a party all week; I had been opening doors, putting stuff away and fiddling around in something of a haze. Thursday saw a piano arrive and a Tesco delivery, Friday saw a fog descend and various family members gather, Saturday saw the fog lift, the sun break through and a period of hyper activity start up. About 50 people came along and participated in a rolling programme of activities revolving around music and eating and drinking. The Grand National sweep was fun (but I didn’t win), then the pasta marathon that Ali had organized, then a BBQ with a range of exotic meats and marshmallows, all day trampolining (for the under fives and over twenties), football and fruit tree flattening and finally a shed-consuming bonfire.

The bonfire activities consisted of a series of impromptu home made experiments in physics and thermo dynamics, these were: hot air balloon flying, party popper pyrotechnics, melt the Stella bottle, photo through a flame and the old favorite “catch the burning flying debris”. All were conducted in a sane if slightly drunken manner and no (major) injuries were reported.

Once the fire had died down and the PA volume was lowered the clan gathering was treated to a variety of late night musical performances from: Tommy Mackay, Norman Lamont, Fi Thom, Lindsay Sugden, Nelson Wright and of course Impossible Songs themselves – all over by one in the morning and no complaints from the neighbours.
Posted by impossible songs at 5:48 PM
Email ThisBlogThis!Share to TwitterShare to FacebookShare to Pinterest