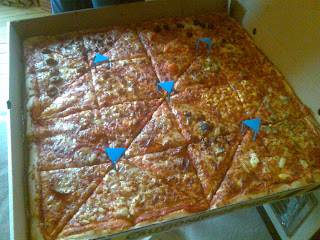 They do things differently in Aberdeen, well some things but I’m not going to list them. This weekend was spent at grandson number threes first birthday party. A bouncy castle had been deployed in the McDuff garden as a threat and opportunity for older folks like me to a) make fools of themselves and b) injure themselves on. Of course we all piled on a various times scattering small children, cakes and cats in our wake, nobody seemed to suffer any long term injury however. So the sun shone, the candle (he’s one) was blown out, the presents unwrapped and a few bottles of beer and some pakoras and spring rolls were consumed. It was a grand day out and we all had fun, sore limbs and mild sun burn to show for it. So it was back down to Aberdeen for Dr Who and tea and the magnificent pizza pictured above. It may have been called “the Beast” or the “Mister T” or the “Heartbreaker” or “Heartstopper” I don’t know, anyway it was 2 feet square, contained a selection of toppings (I had the chilies mostly) and could feed ten grown men, or five fat men, or fifteen men with a mild eating disorder, or fifty teenagers with anorexia. It was fun to eat and even more fun seeing it arrive at the door (after a struggle). For some strange reason we brought the box home as a souvenir.
Posted by impossible songs at 8:24 PM
Email ThisBlogThis!Share to TwitterShare to FacebookShare to Pinterest