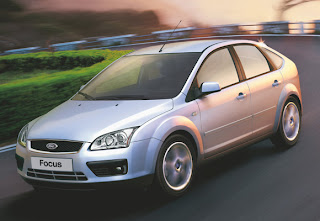 Thankfully the weekend’s giant pizza has been digested, the Arts Festival meeting is over for the week and I’m now in Birmingham airport and at a loose end for short while. I did have some nice asparagus on Sunday which I believed would do me all sorts of good and would also make me pee green urine. Sadly this didn’t happen, perhaps I didn’t eat enough or maybe it was the wrong kind of asparagus…

So the queues are not too bad and I’m just hoping that my flight will be on time. Over a late lunch watching Sky news (whilst consuming coffee, tuna wrap and a maple and peanut Danish) I was wondering how many Ford Focus cars I’ve driven in the past five years (the poor quality of my thought processes is scary sometimes), generally with all of these cars have belonged to Mr. Hertz or Mr. Enterprise. Those fine tin cans have been ferrying me around the UK on a regular basis, almost in comfort and for so long that I can’t remember the previous model the rental guy's used. I can never have had the same one twice so I’m guessing the usage figure must be well over 100.

Longest journey? Birmingham to Plymouth to Bristol (I think), shortest (and most frequent), Birmingham to Sutton Coldfield. Of course I could just get a taxi or just not go but I always seem to land up in the cold driving seat of a Focus first thing in the morning in the grey Brummy air. Motoring anominity? It certainly is but if it picks up Radio 2 and the heater/air con works and it can sniff out the M42 I don’t really care.
Posted by impossible songs at 8:02 PM
Email ThisBlogThis!Share to TwitterShare to FacebookShare to Pinterest