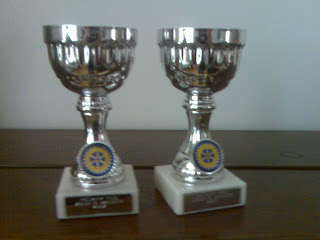 Young brain boxes of the future.

The cleverest kids in Fife are officially in my family. We triumphed at general knowledge and received two fine trophies in a school children’s quiz held in downtown Cupar, once capital and county town of the confused kingdom now only another traffic jam on the way to St Andrews. To make matters worse it was replaced and dwarfed by the urban design dung heap that is “new town” and Fife epicentre, Glenrothes. Anyway thanks to the organisers and the local schools who took part - it made my day.

The doom of relegation has descended like a Biblical plague upon Dunfermline Athletic FC. After a series of Lazarus-like performances and various lucky league points collected, we settled for a mild cuffing yesterday at the hands of some northern team with a long and confusing name that should belong to a pint of dark beer. Groan! and I’ve just bought my cup-final tickets. Perhaps in the future there will be no defeats and no relegations, the morbid rules of political correctness will dominate and simply mean a heartfelt thanks are given to everybody for their participation in another meaningless team event and a certificate for all who played and attended. No more antagonism and joyful singing of that mesmerising refrain, “you’re shite and you’re goin’ down” either.

A snog for Europe.

The Eurovision Glam & Song contest is probably the best and worst TV night of the year. For one thing we all watched it sprawled on various couches (as I presume families did during the war and other major national events), we (the adults) drank pink Champagne, ate chocolate and curry, voted for some obscure, tuneless Eastern European song and like the last World Cup watched as not so Great Britain represented here by England's finest bombed out. At least we avoided the embarrassment of being last like the plain awful Irish entry, a major musical turnip clearly written by a committee of folk-club organisers and gala day planners, it was the worst effort I’ve heard in years. Laugh? I nearly did, and then the strong drink and the curry overcame me. I should be more careful at my delicate age.
Posted by impossible songs at 8:00 PM
Email ThisBlogThis!Share to TwitterShare to FacebookShare to Pinterest