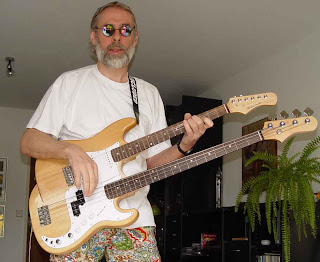 Martin Freitag complete with what appears to be a hand crafted hybrid Fender Precision bass and Fender Stratocaster. I suspect that Martin, an ingenious and clever engineer and a university professor designed and built this crazy looking beast himself. Martin’s band Mobil will no doubt feature this instrument in their next set of live gigs somewhere in deepest Germany. Martin is of course our regular producer, bass player and drum programmer as well as a host of other things – he’s helped keep impossible songs working smoothly over the last five years and also allowed Ali to indulge in her passion for flipcharts. I’m not sure about the specification of the instrument, I imagine that there will be some synthesizer bits installed in the body and that the electric guitar half will only ever come with four strings – they do things very differently in Germany.

The other thing with a double neck is the weight of the thing; you need a strap the width of the M6 to be comfortable at all, no wonder a wee guy like Jimmy Page could only ever do three live songs at a time with his Gibson 6 /12. I recall that the two guys from Hot Tuna (an off-shoot from Jefferson Airplane), Jack Cassidy and Jorma Kaukomen had problems with them. Jorma had a Les Paul/Strat double neck and Jack had a Gibson/Fender bass, a course of steroids, push ups and personal training in pumping iron is mandatory.

Any Dram will do.

Sadly I won’t be entering the “Dream” competition, I’m thinking about the dram one however.

Had a great game of Pooh sticks today on a sunny road way down by Hopetoun sawmill. We found the perfect bridge, stream and height combination and loads of useful raw materials to turn into racing devices. Sticks, dried weed stems, pine cones, bits of wood – ok I know it’s juvenile don’t want to grow up this week.

Posted by impossible songs at 11:02 AM
Email ThisBlogThis!Share to TwitterShare to FacebookShare to Pinterest