The fat shall inherit the earth 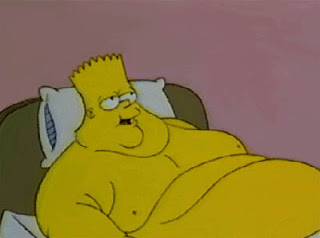 So it has been confirmed that by 2050 the diet dodgers of the UK, the obese, the corpulent and the clinically overweight will be in the majority and a threat to all other life forms on the planet. Well I’m not bothered; they (the fat people) can take pride in their evolutionary success and at the same time take responsibly for their own size and the running of the world (or UK) as well. That’ll teach them, some decent real life stress and having to think about problems instead of puddings might just help shed a few of those precious pounds. The rest of us may now have a fighting chance of getting a shot of the arm rest on a flight and a reasonable increase in private personal space at the same time. Of course if the government was serious about this they’d treat fat people in the same appalling way they treat smokers, gum chewers and TV personalities. All you do is ban fat people from restaurants, cafes, burger bars and the sweetie counter and Pik-a-Mix bar at Woolworths. That way, using the proven road of social exclusion, you will drive them back into conforming to the states’ desired eating regimes. The only problem is that in order for social exclusion to work you have to have created a society that people actually want to be included in. Me, I’m with the unreal Vikings, Kirk Douglas and Tony Curtis, onto this in an unscripted way.

Other things you won’t be able to do most probably before 2020 or by the end of the next Labour government's reign:

Smoke tobacco unless in a private submarine, a barrel going over Niagara Falls or on the moon.
Buy alcohol in bottles/units bigger than 50ml and certainly not at all in a Scottish supermarket.
Carry a Mars Bar or Twix onto an aircraft.
Have sex up in a tree unless wearing a harness and safety helmet and the tree consents.
Urinate into bushes unless involved in a near death experience.
Say anything at all about someone else’s religion.
Tell jokes about fellow human beings or snigger to yourself.
Drive a car above 20mph or anywhere on a road without traffic calming measures (eat that Subaru boys!).
Have zips on your trousers (just too dangerous).
Squeeze spots while looking into mirrors in toilets at Motorway Service Stations.
Criticize the wisdom of having street furniture and warning signs that are in ten languages including Welsh and Polish. This includes multi-lingual signs saying “caution scalding hot water” on all scalding hot water taps.
Be in the same town as a product containing traces of nuts.
Use cash to buy anything other than drugs or sexual favours.
Wear odd socks, hats, checked shirts or a loud tie.
Kick dogs or squirrels if they bite you.
Not wear a condom at all times - just in case. (Applies to both male and female.)
Blog any weird stuff like this.


Posted by impossible songs at 6:51 PM
Email ThisBlogThis!Share to TwitterShare to FacebookShare to Pinterest