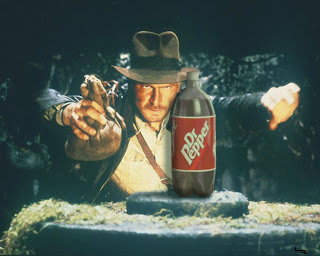 Today's breakfast of choice was a can of Dr Pepper and a Mars Bar consumed alfresco at the Pitreavie Playing Fields in Dunfermline under a pale early morning sky with a fierce East wind slapping me in the face. However the accompanying football match had a good outcome, 4 - 2 in our team's favour. Not a bad start to the day.

Soon it was time to purchase a new wheelbarrow so I headed of to the local B&Q and acquired a nice mid-range model. The great thing is that when you buy a wheelbarrow, you don't need a trolley, you just wheel it around the store, clip a few heels, then through the check out and deposit it into your car.

Home via a fast food outlet (coffee break) and straight into the garage to attempt to start up the ancient, cranky lawn mower. It has been in hibernation for a few months and was pretty reluctant to start. After much futile pulling on the starting cord, sweating, swearing and a sore shoulder I removed the spark plug, cleaned it with a Swiss Army knife , sprayed WD40 here and there and tried again. It roared into life complete with a complaining cloud of blue smoke and a shower of dust. Together we ploughed across the garden narrowly avoiding a collision with the wheelbarrow and some solar lights. The garden has at least now been attended to this year (apart from one failed bonfire) and I felt fulfilled. It also helped that yesterday the kids and I rebuilt the trampoline, straightened the battered poles (Winter gales to blame) and thanks to numerous cable ties put the safety net together (correctly this time). Never forget that it is those same cable ties that keep the space shuttle flying, Disneyland functioning and also hold together much of the USA's nuclear deterrent. Cable ties are a vital invention that should not be over looked, they might just save your life, so keep a few handy.

Thanks to the limited West Lothian oil crisis we're heating the house using alternative fossil fuels, though the fossils all look a bit like coal to me and I know for a fact that the logs came from a petrol station so they are not fossils at all. If fossils did actually burn they'd be quite useful instead of being boring lumps of stripy rock that clever people seem to think were once rubbed on by fish or prehistoric snails. Most seem to end up as paper weights or under glass in a museum and are not used to fuel anything. It's a shame that they don't have a dual purpose. Of course in the future all that will be found to reveal our superior way of life with be the snipped ends of cable ties under a layer of Tesco bags.
Posted by impossible songs at 6:33 PM
Email ThisBlogThis!Share to TwitterShare to FacebookShare to Pinterest